Wall Street Bets: A Revolution Or A Distraction?

If you’ve been following financial news throughout 2021 so far, you’ve probably heard something about Wall Street Bets or GameStop, probably Robinhood as well, maybe even “stonks” or “meme traders.” Most of the fiasco involving these terms happened back in January; ancient history as far as the news cycle is concerned. But I think it’s worth revisiting, because it highlights some troubling trends in the world of investments and trading.

Back in April, video game retailer GameStop announced that they would be putting $1 billion (with a “b”) of stock up for sale, a major increase from the $100 million that was previously available. This was surprising because the company, as a brick-and-mortar retailer, has been struggling a lot in recent years, for much the same reasons that Blockbuster and other video rental places have closed their doors.

So uh... how did they suddenly end up with $1 billion of stock on the table? Well, again, you may remember the circus of a few months ago. But if you’re fuzzy on the details, here’s a quick and oversimplified review –

Back around January, the members of a Reddit forum called “Wall Street Bets” noticed that a number of big trading companies – most notably one called Melvin Capital – were aggressively short-selling stocks from a number of already struggling firms. GameStop was a primary target, along with others such as cinema chain AMC.

Short-selling is a rather complex trading trick, but it basically allows investors to make money off of a company’s stock without owning shares themselves. The trick is to borrow shares from someone who owns them, sell them yourself, and then later buy them back in time to return them to the lender. If the price you buy them back for is less than the price you sold them for, you just made money.

So in effect, short-selling a stock is the same as betting against it. This can be a very profitable strategy… but it can also seriously backfire if you bet wrong.

At some point, the short-seller will need to buy back the borrowed shares and return them to the original lender. And if the price increases rather than decreases, they’ll do so at a loss. Worse, while the price of a stock obviously can’t go below zero, it can go up indefinitely. This means that a short-seller’s potential profit maxes out at the value of the borrowed shares, but there’s no limit on how much they can potentially lose if their bet goes south.

Despite the risk involved, short-selling is very popular (or at least it was until a few months ago). Popularity pays off, in fact, as ganging up on a stock can mitigate the risk. If enough traders or entities are short-selling a stock, they can drive its price farther down than it would naturally go, making their bet against it a self-fulfilling prophecy. This is what several hedge funds were doing with already-beleaguered stocks like GameStop and AMC.

The funds’ short-selling campaign was more than aggressive, however. It was excessive, in the most literal sense: they were shorting more shares of GameStop and AMC than those companies actually had on the market. Imagine a book publisher prints 50,000 copies of some new title, and then discovers a month later that Amazon has not only gotten a hold of all those copies – but now apparently has 55,000 copies in their inventory. Although that would make no sense, something similar was happening with shares of these shorted companies. 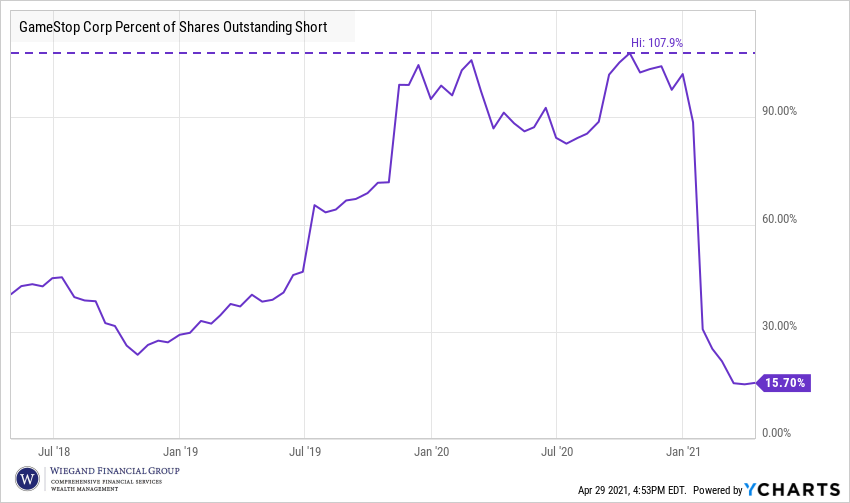 As you can see in this chart, the total amount of GameStop shares being shorted peaked at 107.9%. Although there is a technical explanation for how this can happen, it’s still very weird.  And it caught the attention of the Wall Street Bets crowd.

The online gang of amateur traders decided to try and check the hedge funds’ momentum. Their strategy was to do what’s known as a “short squeeze:” purchasing shares of the other targeted stocks en masse, driving up their share prices as a result and suddenly putting all those short-sellers on the hook.

The plan sure seemed to work. The WSB guys launched an impressively cohesive campaign of snapping up GameStop and other shares, and once the internet at large caught wind of what was going on, thousands of others got in on the action as well. The price of GameStop et al skyrocketed, and the hedge funds were forced to buy back their shares at a major loss. Melvin Capital was gutted as a result, and as of this writing GameStop is still cruising along at $162.30 per share (very impressive compared to the pitiful $17.50 it was before this all started).

The Bet on Melvin Capital

Although there are some naysayers, the prevailing idea across social media and the news is that WSB’s stunt represents a triumph of the common man over the fat cats. And to an extent I agree; I got just as much a kick as the next guy out of seeing a few Scrooge McDuck types get knocked silly by a bunch of poor twenty-somethings day-trading out of their parents’ basements.

But. Now that it’s been a few months and the dust has settled somewhat, the whole thing merits a bit of a more critical review. For one thing, the story most of us have heard isn’t quite the true story. And for another thing, the story that is being widely told has some serious ramifications, especially for young investors.

Let’s look at that first point – the missing context in the popular narrative of these events. In short, it’s very debatable that WSB and company really did stick it to the man. There’s no denying that their short squeeze dealt a serious blow to Melvin Capital in particular, a loss that appears to be as high as 49% at the time of this writing. But if you picture Melvin as just another bloated, slow-moving member of Wall Street’s old boy network, you’ve got the wrong idea.

Led by aggressive young trader Gabe Plotkin, the firm was only founded in 2014 and has averaged 30% annual growth since then. Part of that explosive growth owes to Plotkin’s high tolerance for risk, especially in short-selling. So while there’s no denying that Melvin Capital was a power player on Wall Street, it was hardly the sleeping dragon of complacent old money that the narrative implies. In many ways, Plotkin was and is just as hungry as the young retail traders who attacked him.

And I shouldn’t say that Melvin “was” a power player – it still is. Although it undeniably took a beating in the GameStop fiasco, it’s hardly down for the count. This is due in large part to the rescue efforts of two other hedge funds, Citadel and Point72 – each led by former mentors and employers of Plotkin, Ken Griffin and Steve Cohen respectively. With $2.75 billion contributed between them, the two have substantially undone the damage of earlier.

It’s pretty unlikely that these two financial giants injected all that cash just to be nice to a struggling former protege. Recent events notwithstanding, Plotkin’s previous record indicates that he’ll likely be going places in the future – and in bailing out Melvin, both Griffin and Cohen effectively bought shares in that success. In fact, calling their contributions a “bailout” at all is misleading; we could just as well say they were an investment.

Bandits and Barons: Robinhood and Citadel

Not only was Melvin able to weather the storm, however, but others within the Wall Street ecosystem actively benefited from it. This is pretty easy to see if we just turn around and look again at Citadel, which contributed the lion’s share to Melvin’s recovery – and which also has close ties to Robinhood, the platform that allowed many in the WSB gang to pull off their stunt.

If you’re not familiar with it already, Robinhood is a mobile app that allows users to start stock trading for free. Its sleek, simplistic design, lack of service fees, and emphasis on fractional shares make the otherwise cryptic world of the stock market way more accessible to newcomers. It’s easy to see how the company came up with the name. As one Robinhood spokesperson told Bloomberg, “we built a simple, elegantly designed platform to remove historical barriers to investing and open financial markets to millions upon millions of people previously left behind.”

With that stated objective in mind, a closer look at Robinhood’s business model raises some questions. Lowering entry barriers and removing fees is wonderful, of course – but like any other tech company that offers its services to the consumer for little or no cost, Robinhood still has to make money somewhere.

One of its major sources of revenue is “payment for order flow” (PFOF). Basically, Robinhood receives a bunch of trade orders from their users (i.e., individual investors) and then sells those orders to third-party financial companies who gladly pay for the privilege of executing those individual trades. Sounds weird, but it’s a common practice for brokerages, and arguably helps spread profits more evenly throughout the tangled stock-trading ecosystem.

It’s also controversial, of course, as it seems to leave brokerages with a conflict of interest. Case in point: Robinhood’s single biggest source of PFOF, at least back when this all began, was Ken Griffin’s Citadel. A lot of eyebrows were raised over the fact that this startup, supposed champion of the everyman, was also servicing a massive financial firm on the back end.

Then those eyebrows rose even further when, in the midst of the GameStop trading frenzy, Robinhood suddenly locked up shares of GameStop, AMC and others so that their users could no longer buy them. The company insisted that they were trying to control the sudden market volatility that their app was causing… but to many, it seemed obvious they were just doing the bidding of Citadel and their other PFOF sources.

Not surprisingly, both Robinhood and Citadel denied that accusation in no uncertain terms. We just have to take them at their word.

The Hazy Line Between Winners and Losers

The overall irony is that while the short squeeze craze was making some Wall Street players squirm, it was extremely profitable for others in its own way. It accelerated the already-rapid influx of new users into Robinhood (more on that later), which in turn benefited the companies like Citadel that serviced those users’ trade orders. This is just speculation, but it seems entirely possible that, while Ken Griffin and company were keeping an eye out for Melvin Capital, they were also in no hurry to discourage the public interest in stock trading that had suddenly sprung up.

In short, the winners and losers in January’s big upset aren’t as apparent as the common narrative makes it seem. As for Robinhood… well, whoever’s side they’re really on, they’re ultimately at the center of this whole thing. The startup’s impact on the investment landscape has been huge, and has major implications for the future as well. But that’s all more than I can squeeze into the end of this post.

So stay tuned for part 2 next week, where we’ll dig deeper into what Robinhood actually is, its role in January’s events, and what it all might mean for the future of investing.

Get our weekly finance tip